Deadline for presenting a work-in-progress:
January the 20th 2020

Films in Progress, a joint initiative between Cinélatino, Rencontres de Toulouse and the San Sebastian Festival, endeavours to facilitate the completion of rigorously selected independant latinoamerican films. They are facing difficulties in finding their way into the post-production stage.

Since 2002, this double event presents an annual selection of 12 works-in-progress in two sessions: 6 films in Toulouse in march and 6 films in september in San Sebastián.

Films in Progress allows for these films to be finalized, it gives them an international visibility among professionals and promotes their circulation and exhibition.

Films in progress encourages the meeting and cooperation between the producers of the selected works-in-progress and european partners to make the films reach screens and audiences. With more than 300 profesionnals, amongst the most influencial on the european and international level, which take part each year to these two sessions, Films in Progress is the meeting point with the latin american films.

In this difficult context and within big transformations, Films in Progress has for objective to contribute in an efficient way, not only to help finishing the selected movies and improve their international enhancement, but also to bring them in the circuit of distribution and marketing. In 2018 the movies supported by Films in Progress have been selected in the main Film festivals, and most of them have been released in France: Algunas Bestias by Jorge Riquelme won three awards in Cinélatino and received the Nuevos Directores Section Award at the festival of San Sebastián where it premiered. Ceniza Negra by Sofia Quirós did its world premiere at the Semaine de la Critique of Cannes (Critics' Week). Blanco en Blanco by Theo Court has participated to the Orizzonti section in the Venice Festival where it won two awards : Best Director and the FIPRESCI award. La Paloma y El Lobo (Sobre la estabilidad de los tres cuerpos) by Carlos Lenin (Mexico - Films in Progress 35) was premiered in Locarno Festival at the Cineasti Del Presente section. El Príncipe by Sebastián Muñoz (Chile - Films in Progress 34) was selected at La Settimana de la Critica of Venecia, where it won the Queer Lion Award. Agosto by Armando Capó (Cuba, France, Costa-Rica - Films in Progress 32) did its world premiere in the Toronto Festival (Discovery section). Los Tiburones by Lucía Garibaldi received the Industry Award and the Film Factory Prize in the Films in Progress 34 and received the Director's Award at the Sundance Independent Film Festival in 2019. El Príncipe and Agosto were also presented by the San Sebastián Festival in the Horizontes Latinos section.

By involving film professionals capable of contributing to the post-production, and by encouraging distributors and promoters to diversify their offer, San Sebastian and Toulouse promote the cultural diversity based on a spirit of solidarity and cooperation.

Three prizes will be awarded in Film in progress 37:

The selection will be anounced early march 2020

WE THANK THE PARTNERS OF FILMS IN PROGRESS

END_OF_DOCUMENT_TOKEN_TO_BE_REPLACED 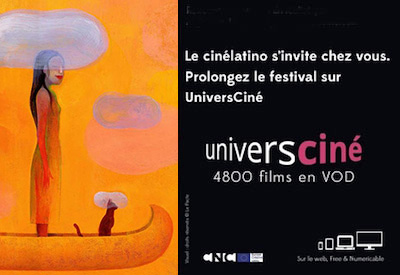